In this guide, we’ll walk you through our trading processes and strategies— opening two trades and donating our $449.07 in profit to the Mozilla Foundation.

High Level Overview: We sold insurance against large directional price movements on two stocks by selling expensive options and then buying them back at a lower price two days later. To do this, on Monday September 16 we opened one credit spread on each stock, closing our positions by midday on September 17th. 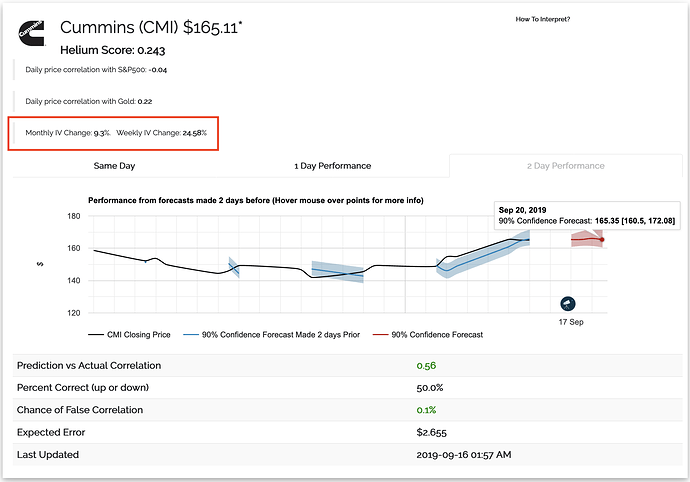 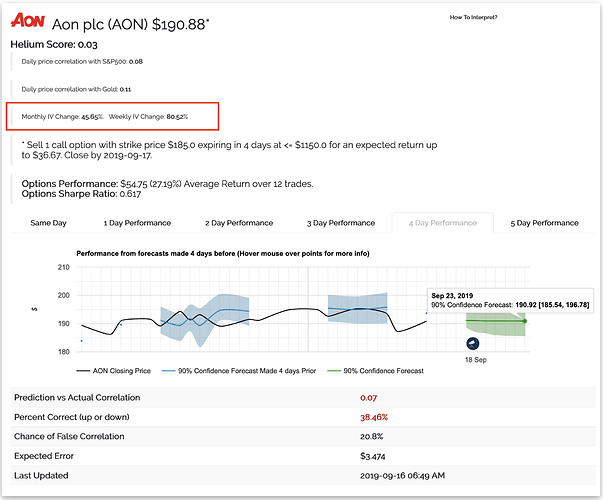 Why did we choose these two models?

Even though AON didn’t have a very high Helium Score (higher score means more accurate performance), both of these stocks had high Implied Volatility— this means that the market thought these stocks had a good chance of experiencing large price movements. In the case of AON, the IV (Implied Volatility) was up about 80% from the week before and about 45% from the month before (you can see this in the red rectangle). As options sellers, this is precisely what we want. High IV means more expensive options, which means a bigger credit received by selling them, which results in better odds of making a profit. If IV mean reverts, then the value of the options will decrease over time and we can buy them back later for a profit.

Setting Up Our First Trade: CMI

Helium’s CMI Model was bearish (red forecast) and thought that by September 20 there would be a 90% chance that the price would be less than $172.08. Based on this, we decided to sell a bear call spread— this means that we sold an out of the money call, and bought another call further out of the money at a higher strike price in order to define the risk of our trade. In a bear call spread, if the stock price is less than our short strike price at expiration, we make full profit. On Monday morning (September 16), here’s what the CMI options chain looked like for options expiring in 46 days: 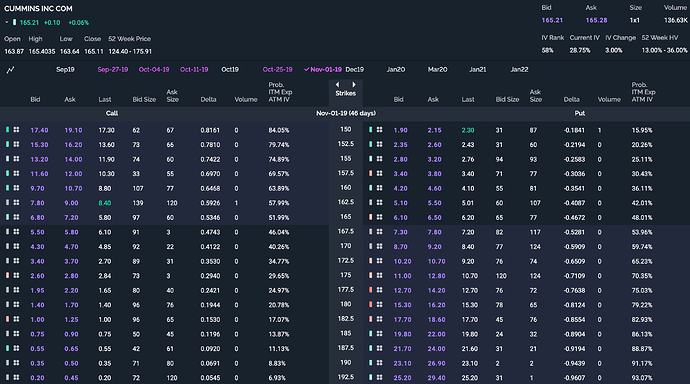 We decided to sell the $175 call (delta = 0.29) and buy the $180 call (delta = 0.19). You can think of this as the market telling us that if we held these until expiration, there would be about a 29% chance of failure. This trade would have been a loser if the price was greater than $175 by expiration, or if Implied Volatility increased too much and we closed out early for a loss. However, since we only held for 2 days, our odds of failure (losing money) were less than 29%. Here’s what E*trade’s snapshot analysis looked like:

Since we were comfortable with the max loss of $1925, we pulled the trigger.

Setting Up Our Second Trade: AON

Helium’s model for AON was bullish (green forecast) and thought that there was a 90% chance that by September 23 the price would be greater than $185.54. Based on this, we decided to open a bull put spread, which was the exact same idea as our CMI trade, but with puts instead of calls. This also helped reduce the overall market risk of our portfolio by having one bullish position (AON) and one bearish position (CMI). Here’s what the AON options chain looked like on September 16 for options expiring in 32 days: 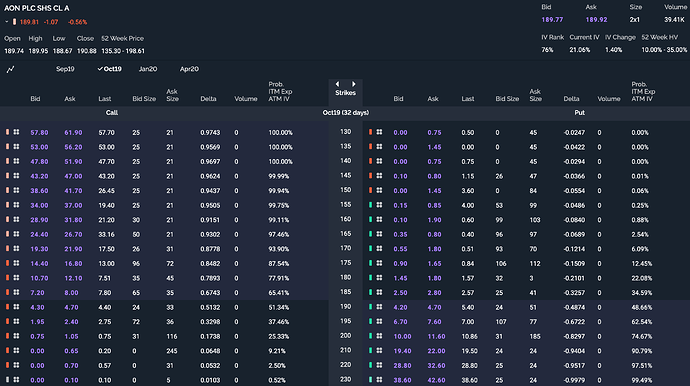 Since we were comfortable with the potential for a $4010 loss, we opened the position. Just like the previous trade, you can think of the options we bought as us buying insurance on the insurance that we sold in order to limit our potential losses and gains.

Even though we only placed our two trades the day before, we were up about $500 (paper money, not realized profit) so we decided to close out and lock in our profit. Implied volatility decreased in our favor, making both the options we bought and sold decrease in value— this is what we wanted. To close out, all we had to do was buy back the options we sold and sell the options we bought. Here’s the final results:

We donated the $449.07 profit to the Mozilla Foundation.

The direct work of the Mozilla Foundation focuses on fueling the movement for a healthy internet. We do this by supporting a diverse group of fellows working on key internet issues, connecting open Internet leaders at events like MozFest, publishing critical research in the Internet Health Report, and rallying citizens around advocacy issues that connect the wellbeing of the Internet directly to everyday life.
The Foundation is also the sole shareholder in the Mozilla Corporation, the maker of Firefox and other open source tools. Mozilla Corporation functions as a self-sustaining social enterprise — money earned through its products is reinvested into the organization. 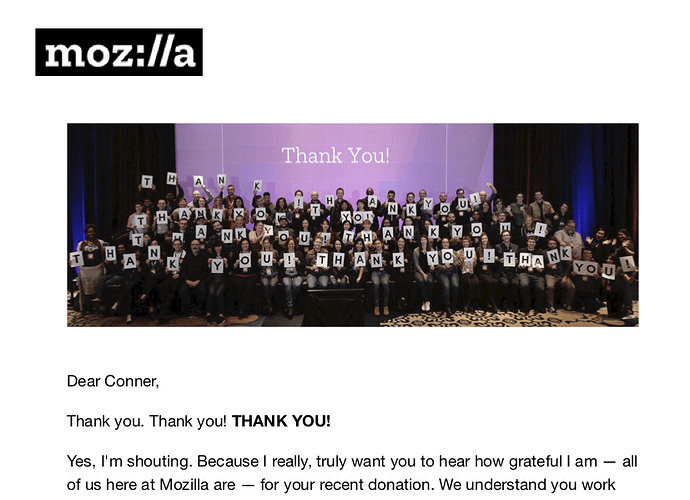 *Disclaimer: Nothing on Helium Trades or our blog constitutes investment advice, performance data or any recommendation that any particular security, portfolio of securities, transaction or investment strategy is suitable for any specific person. Helium Trades is not responsible in any way for the accuracy of any model predictions, price data, or trading. Any mention of a particular security and related prediction data is not a recommendation to buy or sell that security. Investments in securities involve the risk of loss. Past performance is no guarantee of future results. Helium Trades is not responsible for any of your investment decisions. You should consult a financial expert before engaging in any transaction.